Our lab studies processes involved in the positioning of nuclei and other organelles to specific locations within a cell. We are using the nematode Caenorhabditis elegans as a model organism. We use genetic, biochemical, cellular, and molecular approaches to study this basic problem in cell biology and human disease.

For a lay-person description of our studies see “Nuclei don’t use Google Maps.”

We are located in the Department of Molecular and Cellular Biology at the University of California, Davis. The city of Davis is a small college town in the central valley of California, an hour from the San Francisco Bay area and two hours form Lake Tahoe. We’re only 15 minutes from Sacramento and the major airport there, yet the city is physically separated from neighboring towns by 10 miles of farmland in any direction.

We have positions for postdoctoral fellows and graduate students from two programs: Integrated Genetics and Genomics, Biochemistry, Molecular, Cellular and Developmental Biology (BMCDB). Please contact Dan Starr if you are interested.

Please see the description of our research, and explore our work by checking out the publications page of this website. 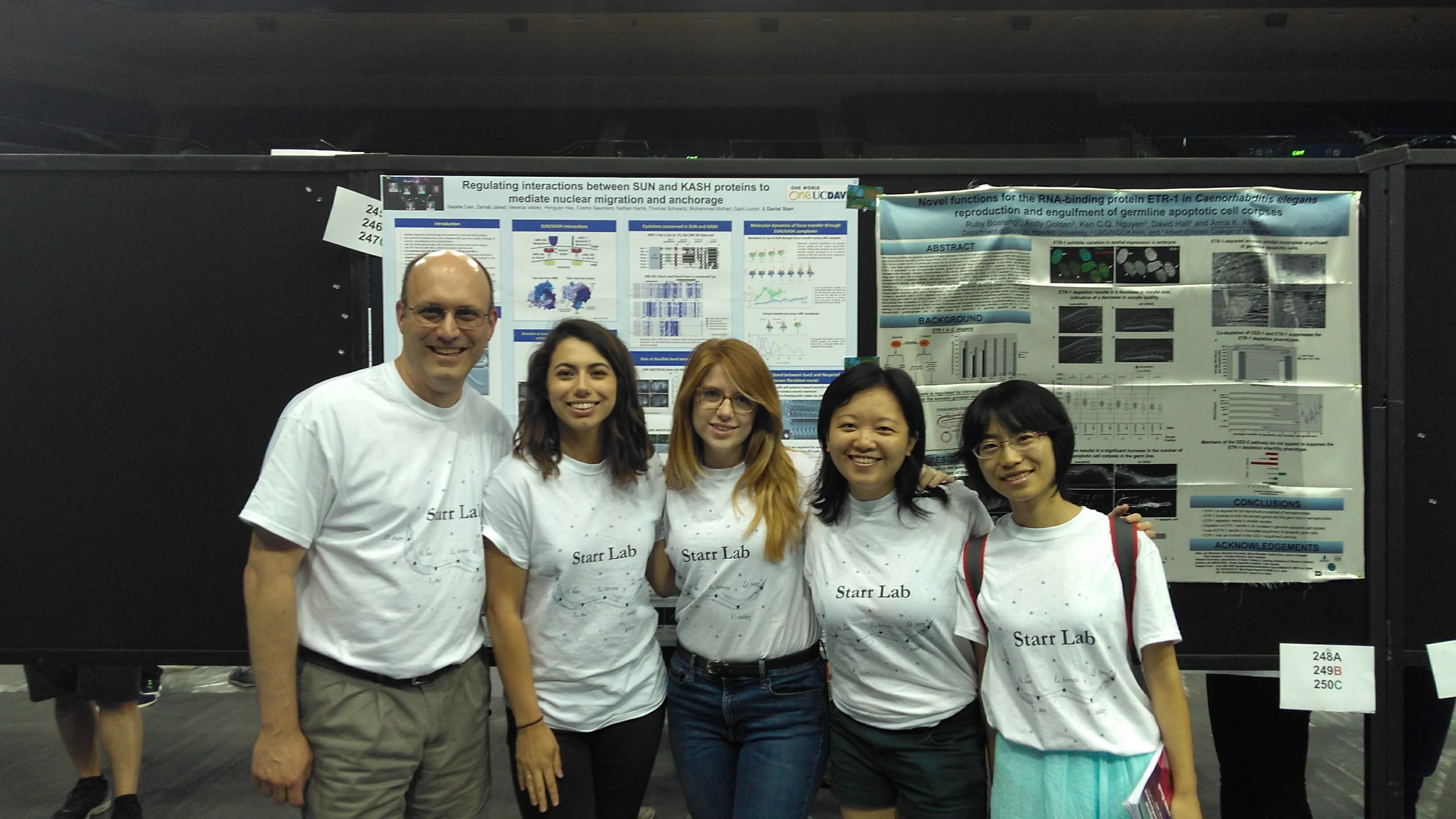 October 2018: Our recent work on SUN and KASH protein interactions is out at Current Biology.

July 2018: Hongyan passed her QE! Starr lab is 2 for 2 this year. Congratulations!

July 2018: We are sad to see Leslie and Venecia leave. But super proud of what they are off to do! Venecia is heading to grad school at Princeton and Leslie will be joining IGG at UC Davis. These programs are lucky to get these two excellent scientists and people!

May 2018: Linda passed her QE! She is officially ready to do her PhD studies–Congratulations!

May 2018: Jamie Ho won second prize, awarded by Paul Sternberg, at the Bay Area Worm Meeting for her micropublication!

March 2018: The Starr lab is growing! Jamie and Ellen are joining the Starr lab!

June 2017: Congratulations to Linda Ma, our PhD student for being accepted into the T32 MCB Training Program! It comes with full support for two years from the NIH, on top of her NSF award she already had!

June 2017: Congratulations to Qiming for graduating with a BS/ He is now off to be a tech in Barbara Meyer’s lab

March 2017: We are happy to have Hongyan and Linda join the Starr lab!

Feb 2017: Natalie is off to bigger and better things. She is now in Cambridge, MA and is an Editor at Cell Reports. Send her your best papers!

Dec 2016: Our collaborative studies with the Engebrecht lab on UNC-84 and DNA damage were published in JCB. Check out the JCB:Spotlight by Silva and Jantsch.

July 2016: Venecia has joined the lab full time and we are happy to have her as part of the team.

June 2016: Courtney presented her Exit Seminar! It was an amazing talk from an awesome thesis!

May 2016: Congratulations to Courtney for winning the Dean’s Mentorship Award!

Jan 2016: Congratulations to Venecia who has been selected as a recipient for the Schilling Undergraduate Research Award!

June 2015: Congratulations to Lira for earning a Citation for Excellence from the College of Biological Sciences! Lira is graduating this month and then headed to Osaka Japan to be a technician in Akira Shinohara’s lab.

June 2015: Robert is one of 15 undergrads nation wide to receive a travel award from the Genetics Society of America! He will be joining us at the International Worm Meeting!

June 2015: Congratulations to Paul (aka Muscles) for finishing his MS degree and getting a job at Expression Systems in Davis!

July 2014: Hooray for Courtney and Erin! Their paper was accepted for publication in MBoC!

June 2014: Congrats to Lira who has been awarded a Provost’s Undergraduate Fellowship for research in the lab this upcomming summer and fall.

June 2014: Congrats to Robert who has been accepted into the ET-CURE research program at the UC Davis Cancer Center.

June 2014: Congrats to Natalie and Erin, their nuclear envelope architecture paper has been accepted by The Journal of Cell Biology!

April 2014: Congrats to Erin who is moving to bigger and better things as the Graduate Group Officer for BMCDB at UC Davis!

April 2014: Congrats to Sumitra who will attend graduate school at UCSF this fall!

Nov 2013: Check out our new UC-HBCU grant to recruit URM students to our PhD programs.

June 2013: Congrats to Courtney making us proud while passing her qualifying exam!

April 2013: KC Hart has decided to go to Stanford for graduate school this fall. Go KC!

March 2013: Welcome to Paul Kuehnert who will join the lab for his thesis studies.

Nov 2012: Yu-Tai, Jon, Minh, Dmitry, Danny, Marina, and Karin have published a paper in Genetics on the first emu gene!

Sept 2012: Congrats to Dr. Yu-Tai Chang for turning in his PhD thesis!

June 2012: Congrats to Minh Ngo, recipient of the College of Biological Sciences Undergraduate of the Year award!!!

May 2012: Congrats to Courtney Bone for being awarded an NIH training fellowship!!!

Theme by Anders Noren — Up ↑