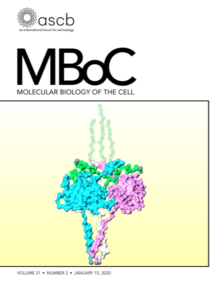 The LINC complex depicted here transfers mechanical forces from the cytoskeleton across the nuclear envelope and into the nucleus. Small differences in the molecular structures of LINC complexes allow drastically different responses under force and may contribute to their diverse roles in various cellular functions. See the article by Jahed et al. 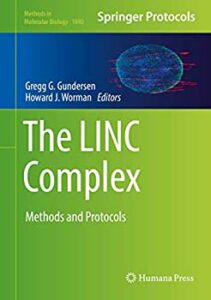 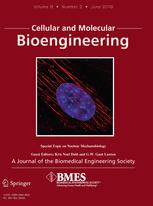 The study of the mechanobiology of the cell nucleus has become an active and fruitful area of research marrying numerous fields in an attempt to understand both how forces and biochemical signaling are coordinated to modulate genome activity and homeostasis and how defects in these processes may impact human disease pathogenesis. 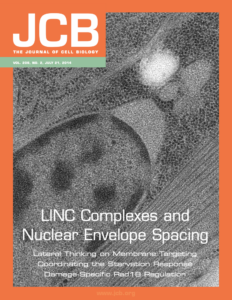 LINC complexes do not maintain the space between nuclear membranes, except in cells exposed to mechanical stress, Cain et al. reveal. 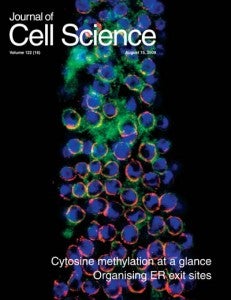 Immunostaining of KDP-1 (green) and lamin (red) in a syncytial C. elegans hermaphrodite gonad. DAPI-stained nuclei are blue. The novel KASH protein KDP-1 localizes to the nuclear envelope where it functions to ensure progression of the cell cycle. 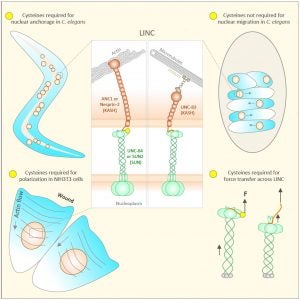 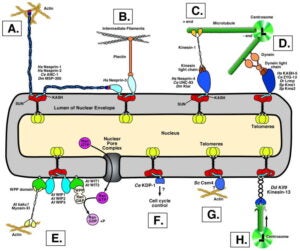 GWG Luxton, DA Starr (2014), KASHing up with the nucleus: novel functional roles of KASH proteins at the cytoplasmic surface of the nucleus. Current Opinion in Cell Biology.